The ‘dreadful images’ that scare Joseph, the toymaker, are graffiti drawn all over the ‘fictional land called London’. The illustration above, depicting Joseph’s toy hung from a tree, is based on an actual place in London: the corner of Pollard Street and Pollard Row, in Bethnal Green. This is where the English graffiti artist and political activist Banksy created ‘Yellow Lines Flower Painter’, one of his famous pieces of street art. 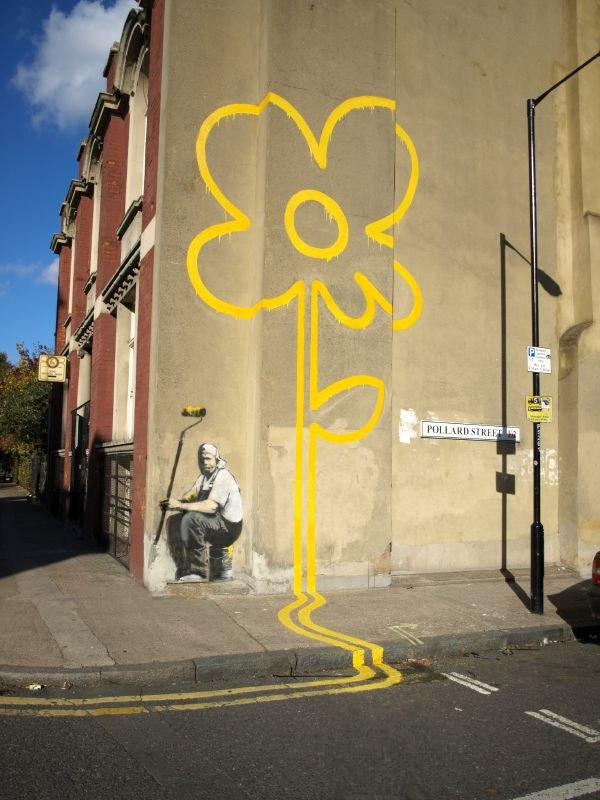 Copyright protects different types of work, such as books, songs, films, as well as artistic works. In the UK, an artistic work is defined to include a graphic work, photograph, sculpture or collage irrespective of artistic quality, and graffiti is a type of graphic work.

However, just because the mysterious girl with the light blue hair has created original works of graffiti this does not necessarily mean they will be protected by copyright.

Historically, as a matter of public policy, the courts have refused to protect works which they considered to be immoral, obscene or irreligious. For example, in the early 20th century, one judge refused protection to an author’s dramatic work because it advocated ‘free love and justifies adultery’. He commented: ‘It is clear that copyright cannot subsist in a work of a tendency so grossly immoral as this.’

Today, that judge’s attitude seems rather prudish but the courts have recently reaffirmed that copyright will be refused to works that are ‘immoral, scandalous or contrary to family life,’ as well as to works that are ‘injurious to public life, public health and safety or the administration of justice’.

Lots of local authorities throughout the UK provide ‘free walls’ on which graffiti artists can create their works lawfully, but anyone caught doing graffiti on buildings and other public spaces without permission can be arrested and prosecuted under the Criminal Damage Act 1971. Also, the Anti-Social Behaviour Act 2003 introduced new powers for local councils to punish offenders and require them to help clear up any unwanted graffiti.

So, even though the graffiti in the video are original artistic works created by the mysterious girl, it seems they are also acts of criminal damage. For this reason, they may not be protected by copyright.

This case concerned the work Spycatcher written by Peter Wright (1916 – 1996) a former MI5 officer. The book was a part memoir, part exposé of MI5 and its operations.

The UK government tried to ban Spycatcher in the UK and prevent its publication elsewhere in the world, unsuccessfully. However, as Mr Wright’s memoir had been written in breach of the duty of confidence he owed to the Crown (his employer), he was denied copyright in his work. The House of Lords held that Mr Wright would not be able to bring an action for copyright infringement because of the ‘disgraceful circumstances’ under which the book had been written.

That is, it was not the nature of the content in the book but the circumstances under which the work had been created that meant Mr Wright could not enjoy copyright in his work.

Should works that are immoral be denied copyright protection? What exactly does it mean to say that a work is immoral? Or can you think what might be meant by works that are ‘contrary to family life’?

What about works created in breach of the criminal law or that are otherwise unlawful? Should unlawful graffiti be regarded as protected by copyright? What about the work of Banksy, and other underground graffiti artists. Is it in copyright or not?

You can find out the location of legal graffiti walls around the world here.

Download the PDF version of Case File #8 – The Dreadful Images.

The pipe has been associated with the image of Sherlock Holmes since Sir Arthur Conan Doyle’s (1859 – 1930) stories were first published in The Strand Magazine with illustrations by Sidney Paget (1860 – 1908).