When you want to use a work that is in copyright (and copyright lasts a long time), you need to get permission from all copyright owners. Some works have several rights attached to them and each right may have more than one owner so you may need to get permission from them all. That is not as bad as it sounds though; for many of the works you are likely to want to use licensing is made easy by organisations called collecting societies that can give you permission by selling you a licence on behalf of the rightsholders. Even so, you may need to get more than one licence when there are several rights involved.

Let’s say you want to use the track of your favourite song in a clip you are making of a special event: rights in a sound recording belong to different groups of creators and each needs to give permission. The composer of the song may be a specialist song-writer working alone or with partners, such as with someone who writes the lyrics, or it could be the band that records it. Either way, they have rights in the composition and the composers’ collecting society PRS for Music can sell you a licence to use their rights in the song. Rights in the sound recording of the song are owned by two sets of rights owners, the performers and the sound recording maker, that is, the label. Permission for them can be obtained from the PPL (Phonographic Performance Limited). You need both before use of the track in any public performance is legal, whether in your local community centre or via the internet.

Nowadays, it is pretty simple to get these permissions. You can apply to the collecting societies online and buy a licence. For some small uses, for example for making a video of your wedding, you can get a combined PRS/PPL licence. One final point, even if you record the track yourself from the radio or download it legally, you still need permission from the song writer(s), performers and record label to play it in public.

Collecting societies facilitate the reuse of other types of works too, such as newspaper articles. If you need permission to reproduce or share a newspaper article, the relevant licences can be obtained by NLA Media access Ltd. A list of licensing bodies and collective management organisations can be found here: https://www.gov.uk/guidance/licensing-bodies-and-collective-management-organisations

Getting permission for film is not so easy because films are complex works involving copyrights of a large number of contributors (music, script, cinematography, etc.). If you want to use clips from someone else’s film, you need to identify all the copyright owners and obtain their permission. In the UK, the first copyright owners of a film are the producer and the principal director. However, other parties like commissioning parties and distributors might be involved and hold some of the rights. Also, it is important to remember that if the film received a grant, the funding body usually retains the copyright, so you need to check on that.
It is possible to find archive footage whose rights have been ‘cleared’, meaning that all permissions involved have been obtained. A good place to find information about resources in the UK available to filmmakers is:

Getting permission when you produce new audiovisual products can be even more difficult, since the use of every different work that appears in your film has to be cleared: intellectual property rights exist not only for script, images, footage and music, but also for brand names, logos, fonts, texts and designs. The process can be very long and expensive. You can find guidance on using other people’s intellectual property at the following link: 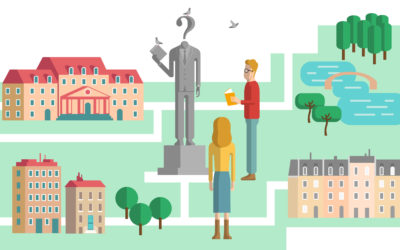 A work – such as a book, a piece of music, a painting or a film – in which copyright exists, but where the copyright owner is either unknown or cannot be located is referred to as an ‘orphan work’.