The pipe has been associated with the image of Sherlock Holmes since Sir Arthur Conan Doyle’s (1859 – 1930) stories were first published in The Strand Magazine with illustrations by Sidney Paget (1860 – 1908). You can see an illustration by Paget of Holmes with his pipe below (there are others available on Wikimedia Commons if you want to search for them). 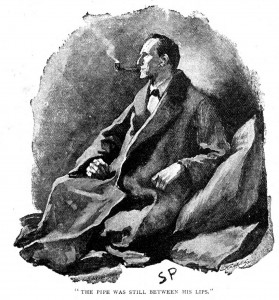 In our video Sherlock wears a T-shirt with a pipe and some writing below, not all of which is visible. The inspiration for this illustration is René Magritte’s (1898 – 1967) famous painting The Treachery of Images, which depicts a pipe with the words ‘Ceci n’est pas une pipe’ [this is not a pipe] underneath.

Like Case File #5 (The Terrible Shark), this Case File #6 demonstrates that you are free to make use of a copyright work, without seeking the owner’s permission, if your use falls within one of the copyright exceptions.

UK copyright law provides for a number of exceptions to copyright, specific circumstances when work can be used without the need to get permission from the copyright owner. There are a number of copyright exceptions set out in the Copyright, Designs and Patents Act 1988, concerning non-commercial research and private study, news reporting, parody, education, and other uses.

A number of these exceptions are sometimes referred to as ‘fair dealing’ exceptions because the law often requires that your use of the material for that particular purpose must be fair. Indeed, each copyright exception has specific requirements about how and when the material can be used without permission, and in order to benefit from an exception you must make sure you fulfil the relevant requirements.

For our illustration above we are relying on the exception which allows quotation from a copyright work, whether for criticism, or review, or for some other purpose, and in this Case File we discuss the circumstances in which it can be used.

QUOTATION FOR CRITICISM OR REVIEW OR OTHERWISE

Before October 2014, copyright law permitted use of a work for the purpose of criticism and review, but it did not allow quotation for other more general purposes. Now, however, the law allows the use of quotation more broadly, so long as the work in question has been made available to the public, you only use as much of the work as you need to make your point, and your use is accompanied by a sufficient acknowledgment.

The quotation exception also requires that your use of the work is fair. What is meant by fair is not defined in the statute, so this is something that will ultimately be decided by judges on a case-by-case basis.

For example, in Time Warner Entertainment Company LP v Channel Four Television Corporation Plc and Another [1994] EMLR 1 (the Clockwork Orange case) Channel 4 made a documentary titled Forbidden Fruit which included a number of clips from Stanley Kubrick’s (1928 – 1999) film A Clockwork Orange. The court decided that including clips making up 8% of the film, which amounted to 40% of the entire documentary, was fair.

Compare the case of Ben Goldacre (author of Bad Science) who embedded a 44-minute clip from a three-hour radio programme on a blog post about irresponsible media coverage of the MMR vaccine. Specifically, Mr Goldacre sought to demonstrate how the media often misrepresent the evidence on MMR, and to draw attention to the serious consequences that irresponsible journalism of this kind can have on public health.

The London Broadcasting Corporation threatened to sue Mr Goldacre for copyright infringement if he did not take down the clip immediately. Lacking the financial resources to cover the potential costs of litigation, Mr Goldacre removed the clip from his blog.

Had the case made it to court much of the discussion would have focussed on whether the use of the 44-minute clip from the radio programme was fair in the circumstances. Mr Goldacre has explained why he used such a long clip as follows: ‘it was so long, so unrelenting, and so misinformed that I really couldn’t express to you how hideous it was. If I tried, without the audio, you might think I was exaggerating. You might think that I was biased’. You can read more about this case here. Do you think Mr Goldacre’s use of the copyright material was fair?

For more information on the quotation exception see the copyrightuser.org page here.

MORE THAN ONE EXCEPTION

Each copyright exception has specific requirements about how, when and what material can be used without permission, and in order to benefit from an exception you must make sure you fulfil the relevant requirements.

People making use of copyright protected work often argue that their use of the work falls within more than one of the copyright exceptions. There is nothing wrong with this at all. For example, what if we are wrong to claim that our use of Magritte’s painting in the video falls within the quotation exception. Is there another exception that we might be able to rely upon?

The background to this case is that Paddy Ashdown, the former leader of the Liberal Democrats, and Prime Minister Tony Blair held secret talks in October 1997 about a possible future Labour/Liberal Democrat coalition government. Ashdown wrote up notes of the meeting, which were later leaked to the Sunday Telegraph. In November 1999 the paper published an article about these secret talks, reproducing lengthy quotes from Ashdown’s notes.

In the Court of Appeal Lord Phillips rejected the argument that they were using the work for the purposes of criticism and review, but accepted that they were using it to report a matter of interest to the public. However, the judge continued that although the newspaper was reporting current events their use of the work was not fair. The fact that the notes had not previously been published or released to the public by Ashdown was an important consideration for the judge, as was the amount of material which had been used.

It is important that there is an exception to copyright for the purpose of quotation, criticism and review so that works protected by copyright can be used for critique or comment by other people; this is important for free speech and for the benefit of society as a whole.

In this case the court had to balance the use of Ashdown’s notes by the newspaper in the interests of public and political discussion against the copyright owner’s rights. Indeed, Ashdown was planning to publish his own political diaries including the note from this meeting with Tony Blair. This was an important factor for the court.

Also, Lord Phillips made it very clear that while the newspaper was not allowed to use lengthy verbatim extracts from the notes, it was still free to report to the public the information contained in the notes accompanied perhaps by one or two short quotes (to make it clear that they were able to give an authentic account of the meeting).

Do you think the court struck the right balance of interests in this case?

The government has produced advice on recent changes to the exception for quotation.

Download the PDF version of Case File #6 – The Famous Pipe.

The ‘dreadful images’ that scare Joseph, the toymaker, are graffiti drawn all over the ‘fictional land called London’. The illustration above, depicting Joseph’s toy hung from a tree, is based on an actual place in London.