In The Unreliable Narrator, our characters find themselves wandering through the history of a very 20th century art form – the (video – or computer) game. In this Case File #31 we consider the implications of intellectual property protection for the gaming sector, including the different aspects of copyright that may be present in a game.

Computer games contain a rich set of potential subjects for intellectual property protection. Even the most elementary game will require the presence of some sort of instructions to the computer hardware. This ‘software’, written in a programming language, can be represented in letters and numbers and printed on paper, though some software would require thousands if not millions of pages and make little sense to those not skilled in the language. Computer hardware has improved over the last few decades, though; today’s games can incorporate a significant amount of photo, video, and audio material, and even games that seem ‘simple’ (like an app played while waiting for a bus) can involve a complex set of instructions.

Although it was initially unclear how to treat software in the world of copyright, it became clear that classifying it as a type of literary work was the preferred approach. Software itself has been protected in copyright law for some time. When the UK revised its copyright law in 1988, it included ‘a computer program’ within the definition of literary work (s 3(1)(b)), confirming and clarifying a change to copyright law first made in 1985. In 1991, the EU (or the European Economic Community, as it then was) adopted a Software Directive, and in 1994, the new international agreement on world trade in services included new provisions on copyright law; both instruments also classified computer programs as a type of literary work.

That doesn’t mean that computer code will be a particularly good bedtime story, but it does mean, as with other literary works, the author of the work will have certain exclusive rights under copyright law. When dealing with software, these rights are about the copying of the code itself, such as making an unauthorised copy of a file or disk or incorporating the code into another game.

A game, however, will normally consist of other elements alongside the computer program itself. Images, sounds, and the like, may be protected (assuming they meet the normal criteria for originality and the like). On the other hand, as explored in Case File #32, certain features within a game (especially the ‘mechanics’ through which the player interacts with the system) may fall outside of copyright protection entirely. In any event, one of the tasks for a game developer (just like we saw in Case File #29) will be obtaining licences for other works incorporated into their game (e.g., if they are not writing their own music, creating their own artwork, and so on). And, an unauthorised copy of a game may also be an unauthorised copy of, for instance, a theme tune contained within it.

As sometimes arises in the context of buyers exercising consumer rights or even tax breaks for developers, it can be quite difficult to work out when a game is ‘finished,’ or what is or is not the game as far as the developer’s contribution is concerned. Games, like software more generally, may need to be fixed (‘patched’) through an update, especially where a problem with the code is identified after it has been first released. Many games are now accompanied by downloadable content (‘DLC’), unlocking features or adding a new level. Some games offer great opportunities for players to create new content using the software – customised characters, new gaming experiences, and more.

A particularly interesting issue has been the phenomenon of machinima, that is, the generation of new creative content using a game. Examples including making audiovisual material while playing a game and exporting it to be viewed elsewhere, or combining game footage with additional material (e.g. an additional soundtrack).

Hugh Hancock pioneered machinima, working in Scotland with creative and technical collaborators and, through the company he co-founded, Strange Company, produced a feature-length film, Bloodspell, in 2008. Strange Company’s machinima.com website grew into a broader hub for game-related content, was taken over by its staff and eventually sold to Warner, recently relaunched as a ‘premier provider of digital content at the intersection of gamer entertainment and culture’.

During his career, Hancock often spoke at conferences on law and technology about the challenges of intellectual property law for his work. In this 2015 video, he talks about the particular barriers faced by machinima creators as compared with, for instance, a filmmaker working with a camera on a street or in a studio. On another occasion, in 2013, he told stories about why it matters that the world’s first copyright act, the 1710 Statute of Anne, didn’t contemplate World of Warcraft.

Legal academic Greg Lastowka has written about machinima in chapter 9 of his 2010 book Virtual Justice, highlighting how some game developers encouraged or tolerated the creation of machinima, but did so against a backdrop of a copyright law ill-equipped to handle this novel situation.

30 INPUT “FOR DISCUSSION: THE ART OF GAMES?”

If copyright is about creativity, how creative is game development? Opinions vary; one early court throws some judicial shade by describing arcade game players as ‘fairly undiscriminating insofar as their concern about more subtle differences in artistic expression’ and so not particularly engaged with artistic creativity on the part of the developer. More recently, the Court of Justice of the EU explained (in the Nintendo v PC Box case, which was about modifying computer hardware so as to allow for the playing of a wider range of games than those authorised by the manufacturer) that modern games ‘constitute complex matter comprising not only a computer program but also graphic and sound elements, which, although encrypted in computer language, have a unique creative value which cannot be reduced to that encryption’.

Does it help to think of games as an art form? Does this affect how you think about copyright in the context of games?

Learn how to write your own game in this free FutureLearn course from the University of Reading. 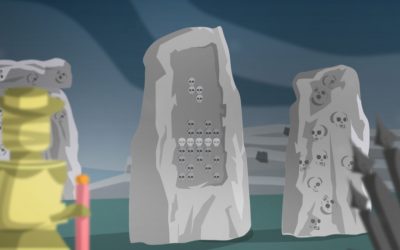 In this Case File #32, we consider a famous dispute about a game similar to one of the world’s most played games: Tetris.